Many told Stephen Abbott he had a calling on his life as a young boy. However, his calling in ministry happened later in life due to different circumstances and the way God shaped his story. 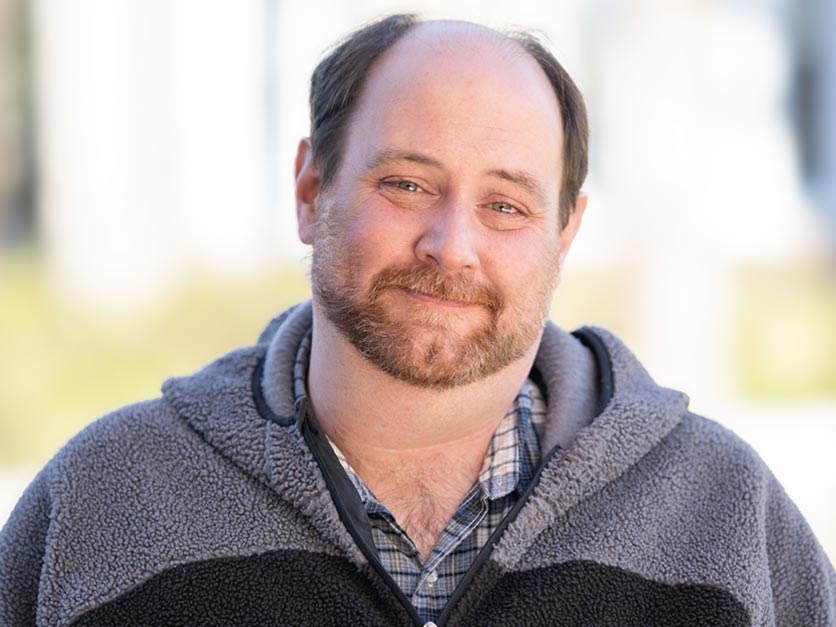 At 38, Stephen Abbott said he had an existential crisis moment that made him question his sense of purpose.

“I was like, ‘oh my gosh, I’m almost 40, and I don’t want to get to the end of my life and say what have I done?’” Abbott stated. “It was then that I determined that there was no more noble purpose than to be able to say I served God during my life.”

Raised in the Lutheran faith, Abbott explored different religions and visited various churches to find his specific calling. With an interest in prison ministry, Abbott is working toward his master’s degree in Christian ministry with plans to graduate in December 2022.

“During my summer session of clinical pastoral education (CPE), I wanted to see how faith draws people into action in the world, instead of it being just about church on Sundays,” Abbott said. “It’s one of the reasons why I’m attracted to the Word and service and chose ministry.”

My approach to ministry is about the relationships. I want to build trust with the person and show I care, not try to convert them.

Abbott’s passion and interest in prison chaplaincy work stem from his experience.

“My goal is to serve in prison chaplaincy because I feel I have a heart for them,” he said. “When we visit someone in hospice or the hospital setting, there’s hardly ever any preconceived notion that the person is there because it’s that person’s fault. But society tends to judge anybody that’s incarcerated.”

By sharing the Gospel, Abbott wants to transform the lives of those labeled felons.

“During my classes at the seminary, I learned many people are incarcerated because our justice system is against them, because of the color of their skin,” Abbott said. “Once released from prison, they cannot find jobs or even vote. I decided I wanted to become an advocate. We must have compassion because they are still humans. I believe that you’re more than the sum of your mistakes, and that comes partially from my past.”

A recovering alcoholic, Abbott is grateful that his family and friends supported and accepted him despite his situation.

“That is part of my reason for wanting to minister to this group of people,” he stated. I want to pass on that compassion. I want to be their advocate and love everyone with the love of Christ.”

Due to the COVID-19 restrictions at prison facilities, Abbott’s summer assignment allowed him to minister at local hospitals, providing spiritual ministry to terminally ill or struggling patients. In more recent months, Abbott interns at St. Andrew’s Lutheran Church in Columbia, learning what it means to be the church without walls and building relationships with those outside the usual worship community.

“My approach to ministry is about the relationships,” Abbott said. “I want to build trust with the person and show I care, not try to convert them.”

During the summer, Abbott shared that he was asked to pray with the parents of an infant struggling with a medical diagnosis.

“I was angry with God; it wasn’t fair,” he said. “But, during my Introduction to Theology course, we read a book about having holiness in those difficult times and entering those times of uncertainty with that person, knowing that God sits in that space, too. The parents of that infant told me they were grateful for me.”

In addition to that course, Abbott credits his Lutheran heritage and LTSS for equipping him for his role in ministry.

“I’ve learned justification by grace through faith,” he shared. “This idea that there is absolutely nothing you can do to prepare yourself for God’s grace. God moves and claims us; we do not choose God. There’s nothing you can do to earn it; instead, it’s a gift from God. That means a great deal to me because it puts each of us on a level field to accept salvation.”

Many told Stephen Abbott he had a calling on his life as a young boy. However, his calling in ministry happened later in life due to different circumstances and the way God shaped his story.

View More
A story of grace

Faith has always played a prominent role in Kristen Baker’s life, and the Lutheran Theological Southern Seminary continues to shape her faith and ministry. After working in corporate America for several years, yet feeling the call to ministry, Baker started classes in the Master of Divinity program in 2019.